“Don’t get me wrong — I love the Alamo Bowl,” UT defensive back Quandre Diggs said. “But I don’t want to come back here.” (link)

You don’t want to come back? I am sure that Alamo Bowl officials can see to it that you don’t come back.

Of course, after getting drilled 30-7 by the Ducks, I can see why you might not want to come back for more.

When it comes to facilities, Oregon wins.  The competition is over and everyone else should pack their bags and go home.  If a school is planning on upgrading their football facilities, they need to take a long hard look at what Oregon has done.

Simply put, Oregon’s most recent renovation is amazing.  For more on the $68 million, 130,000-square foot facility, see the pictures and links below. 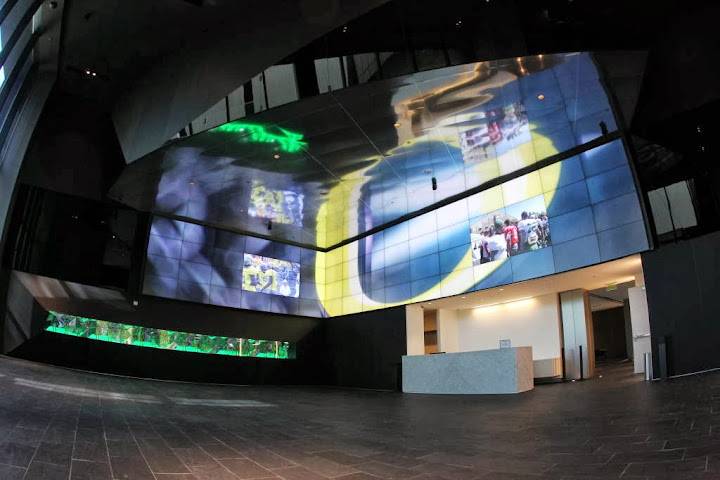 END_OF_DOCUMENT_TOKEN_TO_BE_REPLACED

In case you missed it (as this was mentioned by a couple of mainstream media outlets last week) Oregon got new trash can lids in their football facility.

Half Beaver, Half Duck

This story came out last November (2012) but didn’t get much attention.  Now that it is mid-summer, it is a great time to revisit the story.  Hopefully this will help you pass the time until kick-off.

Also, this is one of the best rivalry trophies I have ever seen.  What other rivalry can say that characteristics of the mascots for each team involved in the rivalry actually come together somewhere in nature?  Is there an animal that is part Buckeye and part Wolverine? No. What about part ‘Gator and part Seminole? No.  Aggie and Longhorn?  No.  In my opinion, it would be a real shame for Oregon and Oregon State to NOT use the Platypus as their rivalry trophy.

In Oregon, Civil Rivalry but Quirky One
by Greg Bishop
Published: November 22, 2012
NYTimes.com

CORVALLIS, Ore. — In the broadest, most stereotypical sense, one of the oldest rivalries in college football pits Ducks against Beavers, hippies against farmers, liberals against conservatives. It is defined by proximity and mediocrity, by civility and acrimony, by close games and foul weather and the last 0-0 tie in Division I.

The Civil War, they call it.

The series started in 1894, when Oregon State University, then known as the Oregon Agricultural College, defeated the University of Oregon, 16-0. It will continue Saturday when two top-20 teams meet here for far more than local bragging rights.

For years, the programs seemed to lack a central ingredient to any rivalry: something to win. There was no Golden Egg (Mississippi and Mississippi State), no Keg of Nails (Louisville and Cincinnati) and no Apple Cup (Washington and Washington State).

This brings us to a mystery, to the story of the Platypus Trophy, once missing, stolen and lost — “I’ve heard rumors,” Oregon offensive lineman Nick Cody said — now found.

“I haven’t seen this since 2007,” Warren Spady said as he surveyed his handiwork this week.

Spady drew the platypus assignment in 1959, as an undergraduate at Oregon. He bought two blocks of wood and began to carve, using a stuffed platypus for inspiration. He worked day and night for a month, with four mallets and six chisels, until his forearms ached, until the beak resembled a Duck and the tail looked like that of a Beaver.

While he sanded the trophy smooth, the game approached. He never did finish the feet.

In the early 1960s, the trophy went missing for months, then years, then decades. In 1986, while on sabbatical at Oregon, Spady bumped into the platypus, his platypus, in a water polo trophy case on Oregon’s campus. Then it disappeared again.

Read the rest of this article HERE

You can also check out the Platypus Trophy Wikipedia page for more info.

One of the reasons I enjoy college football so much is that any given game is so much more than just a random match-up.  The history behind each program elevates any possible game from just another match-up to a potential Super Bowl.

In other words, when it comes to college football, a game is more than two football teams playing against each other.  A Saturday in the fall represents a match-up of ideologies, cultures, histories, and entire schools.  The outcome of the game will determine which side is “right,” and which side is “wrong.”

END_OF_DOCUMENT_TOKEN_TO_BE_REPLACED I don’t really care about the NFL but the Draft always presents interesting college themed sub-plots.  One of the more interesting sub-plots that I noticed this year was that the Philadelphia Eagles drafted USC QB Matt Barkley.

Keep in mind, I am not criticizing the pick at all, as I am sure Barkley will be a fine NFL QB.  However, like I said in the first sentence of this post, it’s the “sub-plot” that interests me.

“We had Matt rated in the top 50 players in the draft,” Kelly said. “We talked all along about how we were going to take value, and there was no better value than for us to open up today with than taking Matt.

According to the quote (and link) above, Chip Kelly had Barkley in his top 50 players for this draft.  Further, the Eagles traded up from the 101st pick, to the 98th pick, in order to grab Barkley.

END_OF_DOCUMENT_TOKEN_TO_BE_REPLACED

The report outlines more detail surrounding Oregon’s activities and use of Will Lyles (Complete Scouting Services) who allegedly provided Oregon with an illegal recruiting advantage, among other violations.

While looking at different schedules for the 2013 season, I couldn’t help but notice that Oregon’s is (at least on paper) really “manageable.”  Yes, I am using the word manageable instead of joke.