Apparently the following information was released back in October but I had completely missed it and did not receive a press release about it (until today, January 15, 2018). As I previously posted, the Rotary Club of Houston announced that they would not be giving out the 48th annual Lombardi Award despite having presented the previous 47 awards. You can read the Rotary Club of Houston’s press release here on OnePointSafety.com, or on their site at LombardiAward.org.

Today I received a press release in my email announcing that the award would be given out on January 27, 2018. However, it will now be awarded by the Lombardi Foundation (click here to read the October 2017 press release).

A few notable differences between the October 2017 release, and the release I received via email today, are: (1) the location of the event will be held at Lone Star College (in Houston) as opposed to the Hobby Center, and (2) the second release contains a list of award nominees.

Up to seven finalists from this list will be selected by the award voters this week and announced next Monday, Jan. 22. Four of the finalists will be invited to the Lombardi Honors presentation that will include several other awards being recognized, including the Lombardi Coach of the Year.

If I find a copy of the January 2018 release online, I will post it here later.

Logo courtesy of the Rotary Club of Houston

I have been a college football award voter since at least 2009 (and possibly as far back as 2006 from what I can remember, although at this time, I can’t find proof that I voted in anything earlier than 2009). I love the individual college football awards; I have always taken pride in my status as a voter and always give my votes serious consideration.

However, a couple of weeks ago I was notified that the Rotary Lombardi Award will not be given out this 2017 season for reasons that are not entirely clear. The purpose of this post is not to speculate as to the reasons, but to simply inform readers of this decision. As far as I know, in July of 2017 the award was still scheduled to be awarded after the 2017 season, as a pre-season watch list was announced on July 31, 2017.

The following is the press release from the Houston Rotary Club that was released in late September 2017, explaining the current situation:

HOUSTON, Texas (Sept. 29, 2017) – Representatives of the Lombardi family have elected to end the historic and long-standing relationship with the Rotary Club of Houston. Consequently, the Rotary Club of Houston will not present the 48th Annual Rotary Lombardi Award for the 2017-2018 College Football Season as previously announced. The Club is very proud of its history in promoting, managing and presenting the Rotary Lombardi Award for 47 years.

The Rotary Club of Houston is a non-profit volunteer organization that established the Rotary Lombardi Award to honor legendary coach Vince Lombardi and to raise funds to fight the deadly disease that claimed his life—Cancer. Since 1970, the Rotary Club of Houston has presented this prestigious award to a talented college football player who not only demonstrates outstanding athletic performance and skill, but exemplifies the type of discipline, courage and wisdom that define Coach Lombardi’s exceptional brand of leadership. Proceeds from the Rotary Lombardi Award have benefitted three designated charities—the American Cancer Society, M.D. Anderson Cancer Center, and Texas Children’s Hospital Cancer Center.

In the immediate aftermath of “Hurricane Harvey” thousands of people remain displaced and face a challenging recovery. The Rotary Club of Houston will continue to provide assistance to those in need during this crisis. Rotarians, like the city they serve, are “Houston Strong!”

About The Rotary Club of Houston

I am not sure if, or when, the Lombardi Award will ever be back. However, my hope is that it returns soon, as it is one of the great college football awards. 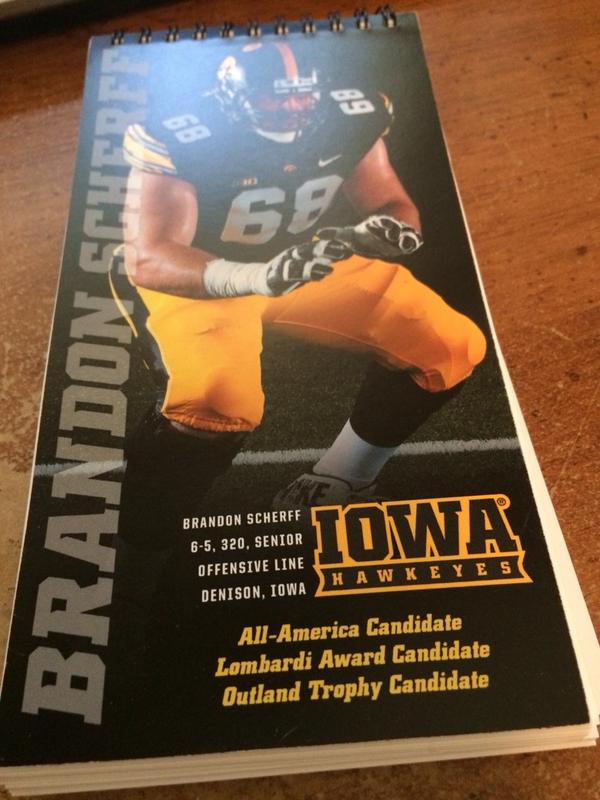 Thanks to the University of Iowa for sending out a notepad featuring their award candidates Brandon Scherff (OL) and Carl Davis (DL).  I am always shocked that more schools don’t do stuff like this.

END_OF_DOCUMENT_TOKEN_TO_BE_REPLACED

WACO, TEX. — Former Texas A&M University head coach R.C. Slocum has been named the 2014 recipient of the AFCA’s Amos Alonzo Stagg Award. The award, which honors those “whose services have been outstanding in the advancement of the best interests of football,” will be presented to Slocum at the AFCA Awards Luncheon onJanuary 14 during the 2014 AFCA Convention in Indianapolis, Indiana.

Slocum retired following the 2002 season with an impressive record of 123-47-2 over the course of 14 years at Texas A&M, making him the winningest coach in Texas A&M’s history. He also had assistant coaching stints at Kansas State and USC, as well. No team at Texas A&M that Slocum led ever experienced a losing season, and the Aggies won three bowl games in that time. Texas A&M made it to 10 bowl games under Slocum and won the Southwest Conference title three times and the Big XII title once.

“I’m so honored because of what the name ‘Amos Alonzo Stagg’ has meant to the coaching profession,” said Slocum. “It’s humbling to be recognized with all the great coaches who have won the award before me.”

Born on November 7, 1944, Slocum was born in Oakdale, La., and grew up in Orange, Texas, where he was an All-District player at Stark High School. Slocum went on to play at McNeese State in Lake Charles, La., as a tight end and defensive lineman. While there, he set receiving records and was a four-year letterman as a Cowboy. After receiving his undergraduate degree and masters in Education Administration, Slocum went on to coach at Lake Charles (La.) High School in 1968 and 1969. From there, he moved onto Kansas State University, where he was an assistant for the 1970-1971 seasons under Vince Gibson. It was in 1972 when Slocum found himself at the university that would define his career. Under Emory Bellard, and later Tom Wilson, Slocum worked at a variety of positions at Texas A&M, starting as a receivers coach before being moved to the other side of the ball as a defensive ends coach. After a brief stint as the linebackers coach for the Aggies, Slocum was the defensive coordinator for the 1979-1980 seasons. In 1981, he was hired on as defensive coordinator at USC, where his defense led the Pac-10. After his one season with the Trojans, Slocum returned to Texas A&M as the defensive coordinator from 1982-1988 under Jackie Sherrill. Slocum was named head coach of the Aggies in 1989, where he quickly had the team firing on all cylinders.

With Slocum at the reins, the Texas A&M Aggies enjoyed some of their most successful seasons in decades, culminating in three straight Southwest Conference titles in 1991 through 1993. It was Slocum’s famous “Wrecking Crew” defense that led the way for the Aggies through this time, leading the Southwest Conference in four defensive statistical categories and led the nation in total defense in 1991. To go along with the three straight conference titles, Slocum’s Aggies also had one of the greatest league winning streaks, winning 22 straight games and going 28-0-1 from 1991-94. After guiding the Aggies through the transition period between the Southwest Conference and the newly created Big XII Conference, Slocum racked up one last conference championship, defeating the favored and undefeated Kansas State Wildcats in 1998 and obtaining the conference’s Sugar Bowl berth. Slocum stepped down from coaching after the 2002 season and immediately stepped into the role of an advisor for the university that he had put so much into.

He helped even more players find success at the next level, as 50 different Aggies moved on from their time at College Station to play in professional leagues.

Upon Slocum’s retirement, he has worked as a special advisor and assistant to Texas A&M’s presidents, most recently R. Bowen Loftin.

Since retiring from coaching, Slocum has done a multitude of charitable work, serving as the chairman of two organizations: the Children’s Miracle Network in Central Texas and the Cattle Barron’s Association, which raises scholarship money for young people in ranching. He has also helped with other organizations, such as the Peaceable Kingdom Retreat for Children, the Houston Live Stock Show and Rodeo and the Special Olympics.

END_OF_DOCUMENT_TOKEN_TO_BE_REPLACED

The Earl Campbell Tyler Rose Award, announced in 2012 by the Tyler Chamber and SPORTyler, recognizes the top offensive player in Division 1 football who also exhibits the enduring characteristics that define Earl Campbell: integrity, performance, teamwork, sportsmanship, drive, community and tenacity; specifically tenacity to persist and determination to overcome adversity and injury in pursuit of reaching goals. In addition, the nominee must meet one or more of the following criteria: born in Texas and/or graduated from a Texas High School and/or played at a Texas-based junior college or four year college.  The Watch List announced today will be narrowed to up to 16 semi finalists in November and then up to 4 finalists in December. They will be selected by broadcasters, commentators, journalists, fans and (in the future) former winners. The finalists will be brought to Tyler for The Earl Campbell Tyler Rose Awards Banquet scheduled for January 10, 2014.

“We are fortunate to have a celebrity who exhibits the impeccable virtues that define this award. In addition to being a well known sports figure, Earl also earned a college degree, married his high school sweetheart, raised two successful sons and still supports the community where he grew up,” said Cindy Smoak, Vice President, SPORTyler.

Earl Campbell graduated from John Tyler High School in Tyler before joining the Texas Longhorns under legendary Coach Darrell K. Royal. In his senior year, he led the nation with 1744 yards rushing and 19 touchdowns, going on to win the Longhorns’ first Heisman Trophy. He was subsequently drafted by the Houston Oilers where he won Rookie of the Year honors in 1978 and went on to lead the NFL in rushing 3 times. Campbell earned NFL MVP in 1979 and was elected to the Pro Football Hall of Fame in 1991. He now resides in Austin.

“All my life, all I wanted to do was be an athlete. I kept God in my life and surrounded myself with good people. I am humbled by this award named in my honor,” said Campbell.

For more information about The Earl Campbell Tyler Rose Award go to http://www.earlcampbellaward.com/

This year’s list, which was compiled by a subset of the Davey O’Brien National Selection Committee, features 34 of the nation’s best college quarterbacks who were selected based on player performance during the previous year and expectations heading into the 2013 college football season.

Appearing on the Watch List is not a requirement for a player to win the Davey O’Brien Award. Quarterbacks from all 125 NCAA Division I Football Bowl Subdivision (FBS) schools are eligible for the award until the field is narrowed to 16 semifinalists onMonday, Nov. 4. The Foundation and the Selection Committee will announce three finalists on Monday, Nov. 25. The 2013 Davey O’Brien Winner will be announced on The Home Depot College Football Awards on Thursday, Dec. 12.

It may only be March, but some programs are already starting up their marketing efforts! I received the following from UCLA the other day via email. I have always found it odd that programs don’t email more stuff like this out during the off-season. You would think that they would.

While I do my best to keep up with every program, receiving stuff like this via email makes it a lot easier.