I came across the following videos and found them to be pretty informative.  If you like learning the minutiae of college football rules, then you will probably enjoy these videos as well.

In light of the accusations against Johnny Manziel of getting paid for autographs, the following concerns a cause of action that would apparently be available to Texas A&M if Manziel and/or Texas A&M is found to have violated a NCAA rule.  The cause of action is not necessarily available to the Manziels despite the NCAA ruling earlier this year that they (or their corporation) can profit from a trademark lawsuit.

However, none of this addresses the jurisdiction question of whether or not any of the autograph brokers who could be potentially liable under this statute, are subject to the jurisdiction of the State of Texas.  The brokers who orchestrated the reported signings with Manziel that allegedly happened in Connecticut and/or Florida might be out of reach for Texas law.  However, there was one signing that was reported to have happened in Houston, which would probably make the broker involved subject to Texas jurisdiction.

The State of Texas passed legislation in 1987 that could hold the autograph hounds liable for their actions if they paid Manziel for his autograph in violation of NCAA legislation. Section 131.004 of the Texas Civil Practice and Remedies Code states “a person who violates a rule of a national collegiate athletic association adopted by this chapter is liable for damages in an action brought by an institution if (1) the person knew or reasonably should have know that a rule was violated; and (2) the violation of the rule is a contributing factor to disciplinary action taken by the national collegiate athletic association against the institution or a student at the institution.” This would give Texas A&M University the authority to file suit against the autograph hounds if it or Manziel receives punishment from the NCAA. Accordingly, pursuant to Sections 131.006 and 131.007 of the Texas Civil Practice and Remedies Code, Texas A&M University’s damages may include “lost television revenues and lost ticket sales of regular season and post-season athletic events” and “reasonable attorney’s fees and costs.” Certainly, if Manziel is not on the field for the Aggies, there could be substantial losses in revenue.

In short, autograph hounds might want to consider how loudly they express their purported shortcomings and alleged payments to Manziel. There is a Texas statute that can provide a hammer for their alleged actions.

The above block quote was taken from an article that can be found HERE.

Count me among those who previously thought that one had to make a financial contribution in order to be considered a “booster” (for NCAA compliance purposes).

From the NCAA Bylaws:

An institution’s “responsibility” for the conduct of its intercollegiate athletics program shall include responsibility for the acts of individuals, a corporate entity (e.g., apparel or equipment manufacturer) or other organization when a member of the institution’s executive or athletics administration or an athletics department staff member has knowledge or should have knowledge that such an individual, corporate entity or other organization:

(a) Has participated in or is a member of an agency or organization as described in Constitution 6.4.1;

(b) Has made financial contributions to the athletics department or to an athletics booster organization of that institution;

(d) Has assisted or is assisting in providing benefits to enrolled student-athletes; or

(e) Is otherwise involved in promoting the institution’s athletics program.

Link to NCAA Bylaws in PDF

END_OF_DOCUMENT_TOKEN_TO_BE_REPLACED

Last fall (2012), Nick Saban voiced his concern over the fast-paced no-huddle offense. However, Saban is not the only coach to have some thoughts about the no-huddle as Arkansas’ head coach Bret Bielema recently (June 2013) made some comments as well.

Bielema went so far as to actually suggest a potential rule change that would allow a defense to substitute its players during an opposing team’s no-huddle offensive drive.  In discussing his idea, Bielema was careful to say that his rule change was more about a defensive players safety than a desire to slow-down, or stop, a fast-paced offense.

Despite Saban’s and/or Bielema’s intention, we now have a debate:  Should we institute a rule change that would allow a defense to substitute its players during an offense’s fast-paced no-huddle drive, and potentially run the risk of negating that offense’s entire strategy?

One might argue that the current rule is unfair to a defense (and thus more than fair to an offense).  While I can agree that is a valid argument, I do not believe it justifies a rule change.

However, this strategy, employed by many offenses throughout college football, is a strategic advantage found within the current rules.  There was no rule change granted to the offensive coordinators of the world in order to give them this advantage.

Having said that, it would make sense that if a defense wants to find a way to stop an up-tempo, fast-paced offense, they must do so within the current confines of the rules as they now stand.  The defensive coordinators should not be given a proverbial “12th Man,” or rule change, in order to help them find a way to stop these offensive attacks.

In other words, fair or not, I don’t believe the rules should be changed simply because one side appears to have gained an advantage over the other.

Selena Roberts has broken a story on her site at Roopstigo.com, and if true (and I am assuming it is or she wouldn’t have reported it), it would be the next big college football scandal to break in what appears to be an ongoing epidemic.

Over the past couple of seasons we have seen major scandals dominate the news at schools like Ohio State, Penn State, USC, Miami, and Oregon.  Now, the next story has been brought to our attention — at Auburn.

You can read the original report, written by Roberts, HERE at her site.  You can also read the ESPN.com report (with video) HERE.

I found a couple of NCAA rulings that I thought were interesting points of college football law.  They are both fairly rare situations and I don’t expect to see them again, but I like to make note of such things for future reference.  I have always gotten the impression that the NCAA doesn’t follow its own precedent when issuing rulings, however, precedent should be the key to predicting how the NCAA will act in the future.

END_OF_DOCUMENT_TOKEN_TO_BE_REPLACED 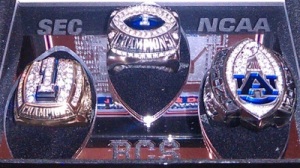 Have you ever wondered about the rule regarding championship rings in college?  The answer is probably “no,” but please humor me.

Personally, I am very interested in the hardware that teams and individuals are awarded each year.  Naturally then, I am interested in the rules regarding these trophies, rings, etc.  So, when I came across this particular NCAA rule today, I figured I would share it with everyone else.