Why would you tease your fans and alumni by scheduling a great non-conference game, only to then punish them by sending them to Houston, Texas (to play in Reliant Stadium)?

The upcoming Wisconsin vs. LSU match-up promises to be a good one.  However, if I were a Badger fan, I would much rather travel to Baton Rouge and see the game played on LSU’s campus.

The same goes if I were a LSU fan.  While I am sure Lambeau Field is great, I am not going to a Green Bay Packers’ game.  If I wanted to see Lambeau Field, I would go to a Packers’ game.  How disappointing it would be to travel all the way to Wisconsin (from Louisiana) and NOT see a game played at Camp Randall Stadium.

Here is what one Wisconsin fan had to say about playing in NFL stadiums:

Here’s where the dream ends. Somehow the series was brokered to be played at Reliant Stadium in Houston and at Lambeau Field in Green Bay. On paper, playing college football in pro stadiums seems like a novel idea. In practice, it forces fans to travel farther and pay more money to see their teams play, while athletic departments make less or lose money on the deal.

Perhaps the idea is to give players a chance to bask in Reliant’s brilliant decade-long history. Or maybe both schools just wanted to help two clearly starving NFL franchises. Whatever the case, it sort of stinks for fans.

When I found this video, I wasn’t sure what to expect.  I actually thought Miles was going to explode or go nuts.  While the video isn’t really that funny, it does confirm what I already knew — Les Miles is crazy.

END_OF_DOCUMENT_TOKEN_TO_BE_REPLACED

Have you read the article on Tyrann Mathieu that appeared in the 22 October 2012 issue of Sports Illustrated? If not, you can read it online by clicking HERE.

Trials of The Honey Badger

Tyrann Mathieu found overnight fame last year, but its spoils have led to comparisons with his imprisoned father, rehab, exile from the LSU football program and, possibly, NCAA violations.

The premise of the article is that Tyrann Mathieu’s NCAA eligibility could be in question due to some promotional flyers and videos that used Mathieu’s image in order to advertise a club/party.  If Mathieu got paid for the ads, or if he knew about the ads and didn’t do anything about them, their could be a violation of NCAA rule 12.5.2.1.

END_OF_DOCUMENT_TOKEN_TO_BE_REPLACED

On 24 August 2012 it was reported that former LSU women’s soccer player, Mo Isom (@MoIsom), did not make the LSU football team as a place kicker.

However, what was not reported was that Mo Isom had apparently (at least briefly) considered transferring to another SEC school in order to increase her chances of making a football squad as place kicker.

END_OF_DOCUMENT_TOKEN_TO_BE_REPLACED

It is always fun to see what college football programs come up with to promote the upcoming football season.  I found this LSU video today at LesMiles.net.  As you will see, it is made to appear as if the 2012 LSU football season is the next big “blockbuster” movie of the year.  I have to admit, this is one of the better “preview” videos I have seen.

I first read this story on Clay Travis’ site, OutKickTheCoverage.com.  University of Alabama head football coach Nick Saban’s daughter, Kristen Saban, has a civil lawsuit pending against her for fighting with her sorority sisters.

END_OF_DOCUMENT_TOKEN_TO_BE_REPLACED

Did Les Miles and LSU not watch the 2012 Orange Bowl between West Virginia and Clemson?

Apparently former Clemson defensive coordinator Kevin Steele, who was fired after the 70-33 loss to WVU, is being hired by LSU and will join the football staff in an administrative capacity.

Of course, I am not sure what he will be “administrating” and I can only hope it doesn’t involve the LSU defense.  After all, a 70-33 beat-down on national TV is not exactly the best ringing endorsement of ones capabilities as a defensive coordinator.

For LSU’s sake, I hope Steele is a good coach who has just had some bad material to work with.  I guess we will see.

Apparently the creator of this shirt would like to take a shower at Penn State and “THEN” root for Alabama! I am not sure why they would want to do this, but it is LSU, so there is no telling.

Maybe they meant to write “THAN?” 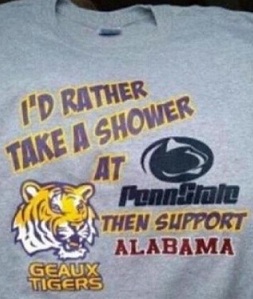