This is another re-posting from my old blog. I have always covered stories about college football trophies, and this is an oldie but a goodie.

Nancy Sain walked into her office in Ben Hill Griffin Stadium Friday and saw a pile of empty bubble wrap where an 80-pound trophy had stood the night before.

The UF Lemerand Football Office manager knew the silver and wooden 1999 Orange Bowl trophy had been on the floor in front of her desk the night before. It had just arrived after some repair work Thursday, and Sain said no one was available to lug the 2 1/2-foot tall piece of hardware downstairs to the safe.

On Friday, the punch-bowl sized silver bowl and the thick wood base were gone.

“It’s pretty bizarre,” Sain said Monday. “You wonder what they would do with that size object.”

At practice Monday, UF coach Steve Spurrier was none too concerned about the fate of the trophy.

“They can make new trophies,” Spurrier said. “I don’t get upset about things like that. Somebody stole it and we can’t find it? They can always make another.”

Still, Sain was shocked anyone would try to steal from the office. She also was surprised the thief did not grab anything else.

“There are other items around here that are not tied down that we’ve never had a problem with,” Sain said. “It has never been a problem before.”

UF police spokeswoman Stacy Badics said the case is under investigation, and UPD will release more information as it becomes available.

This is my first re-posting of an old “College Football Independent” post. It was originally posted on that blog on December 29, 2008.

While looking on ebay.com I came across the 1934 Rose Bowl Trophy! The seller is asking $9,999 for it and it will be interesting to see if anyone actually buys it. This is a great item for any private collection, but $10K is a big price tag.

I have no idea if this trophy sold or not, but the auction’s description said that the trophy belonged to Stanford. Stanford lost the 1934 Rose Bowl game to Columbia and so I imagine this is some kind of participation trophy for having been invited to play in the Rose Bowl (which is an honor, in and of itself).

I think I have mentioned this before, but the OnePointSafety.com is not my first attempt at running a college football blog. I have had a couple of blogs prior to this one, however, none of them were as successful. I had a blog at TexAgs.com titled “Campusology” (hence the name of the tabbed section on this blog), a blog on Google’s Blogger titled “The College Football Independent,” a WordPress.com blog titled “The Crystal Football,” and maybe one more that I can’t remember. I also did some guest blogging at places like PhilSteele.com and HeismanPundit.com; and I had an account at BleacherReport.com (all of which I would like to transfer here if possible).

For the longest time I had thought that everything I posted at those sites was gone, lost to the internet forever. However, the other day I found that my old Blogger and WordPress accounts were still “alive” and I could retrieve some of my old posts. I figured that some of them might be worth saving and so I have decided to start transferring them over here to OnePointSafety.com.

Keep in mind, these old posts are not timely anymore and they are probably worthless to anyone now (in fact, come to think of it, they were probably worthless at the time I originally posted them). However, for preservation sake, I am going to start re-posting them here. I will include the header/banner from the original blog into these posts in order to make these older posts more identifiable and easier for readers to skip or ignore if you are not interested. I hope you enjoy the walk down memory lane as much as I do.

Note: I am going to create a category for these old blog posts and title it “CFBIndependent-CrystalFootball.”  Oh, and I am not going to edit or update these old posts, so you can see them in their original format (and see exactly how terrible they were when I originally posted them). 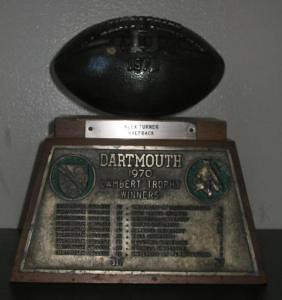 In 1970 Dartmouth went undefeated and won the Ivy League Championship
(and the Lambert Trophy).

END_OF_DOCUMENT_TOKEN_TO_BE_REPLACED

Travis Normand
Originally posted during the 2006 season on my old blog
Re-posted on OnePointSafety.com – January 2, 2018

At the beginning of the 2006 season I was invited to participate in the weekly Heisman poll at HeismanPundit.com. I didn’t have a vote in the Heisman, but the poll sounded like a fun experiment so I accepted the invite. (Also, as a new college football blogger, the poll gave me something to write about; as I had nothing important to say and not much else to write about).

The idea was simple. Each week I would submit my top Heisman contenders as well as a short paragraph about why each one should win the Heisman, and why I ranked them the way I did. I remember forcing myself to write these paragraphs every week; a lot of times not having any clue what to write. Looking back over my “ballots” is hilarious, I mean, did I really want to vote for Brady Quinn?

You can see my original posts / ballots below, as I have reposted them here for the fun of it (and to archive them). It will also show you how bad I was at writing about college football back in 2007 (not that that has changed over the years).

Here we go … (wow, some of these are really terrible).

If you haven’t seen the site www.HeismanPundit.com you should check it out. It is the best source of information on all-things Heisman. In my opinion, his coverage is better than any of the major media outlets. If you are a College Football Fan, and a fan of the Heisman Trophy, you need to check out www.HeismanPundit.com NOW!

1. Troy Smith – I don’t know if anything more needs to be said about Mr. Smith, as his amazing season has already spoken for him!

2. Darren McFadden – This guy just does it all. He has proved that he is a great “back” in the SEC, and is an amazing all-around player. If I were a coach, and could pick just one player to add to my team, I would be hard pressed to not pick Mr. McFadden, and for this reason he is in my Top 3.

3. Brady Quinn – Mr. Quinn is an excellent QB (which most have been saying all-along) and I believe he showed it on Saturday night against a very talented USC Defense. Did the Irish win the game? No. But Brady Quinn stepped up his game on the national stage and showed us all what he is capable of. If I could add just one player to my team, I would add Darren McFadden. But, if I had to pick a QB, Brady Quinn would be my next choice (after Troy Smith) and third pick overall.