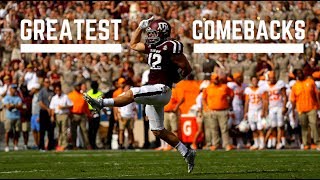 Some of the following information was originally incorporated within another post that I had made back in September of 2017. However, I have added to these lists and consider the information worthy of its own post. So, having said that, here are the greatest comebacks in college football history:

List 1: The winning team trailed by at least 30 points
before overcoming the deficit:

List 2: The winning team trailed by at least 20 points
before overcoming the deficit:

I am still adding to these lists. If you know of a game that should be included, please let me know by posting in the comments below. I am sure there are some games from the 1800’s that have been entirely overlooked, but as I find them, I will include them. Also, all of the above-listed games are Division 1/FBS games. I have not yet researched the other divisions, but I am willing to include them. Again, if you know of a game from another division that should be included, just post it below in the comments and I will add it.