Note on rankings used throughout this post: every rank mentioned is, or should be, the CFP rank at the time the game mentioned was played. In some instances that may be the team’s final rank of the season, and in others it may be the rank at the time the game was played. Further, remember the CFP Committee’s final ranking is compiled before the bowl games and CFP, and they do not re-rank teams after the bowl season / CFP.

Notes on the CFP Committee’s Ranking and Selection Process

CFP Selection Protocol: The following factors are the protocol which the Committee is supposed to use in order to separate, or rank teams, that they consider to be similar (however, the Committee does not define what they consider to be “similar,” and we are left wondering whether a team with one-loss can ever be considered similar to a team with two-losses, or three?). There is no order or weight to which any given Committee member must give to these five factors, and they can consider them in any manner. Further, if team “A” is considered to be unequivocally better than team “B” (or any other team), then the protocol or factors below do not come into play, and they can be wholly ignored, as they are not needed to separate team “A” from other teams. You can see the official protocol on their website at CollegeFootballPlayoff.com:

Without going too far into what is written on the Committee’s selection protocol sheet, the following are a few items of interest that I have taken from that sheet: 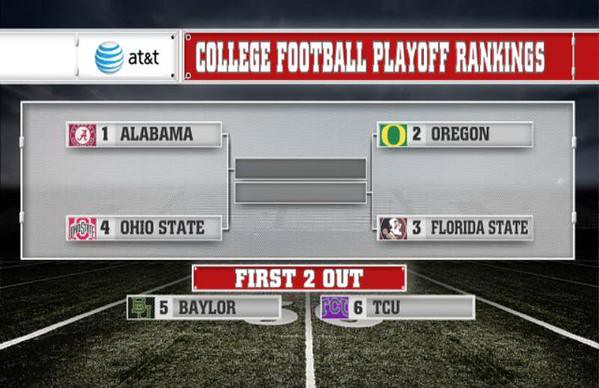 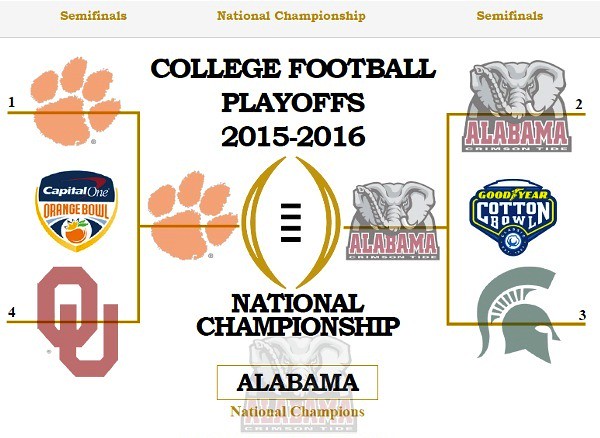 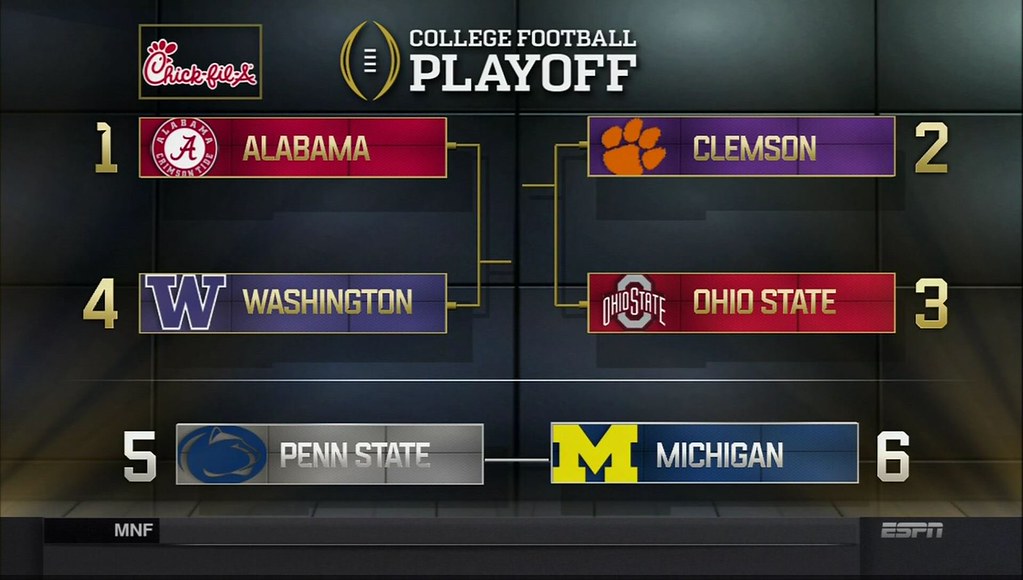 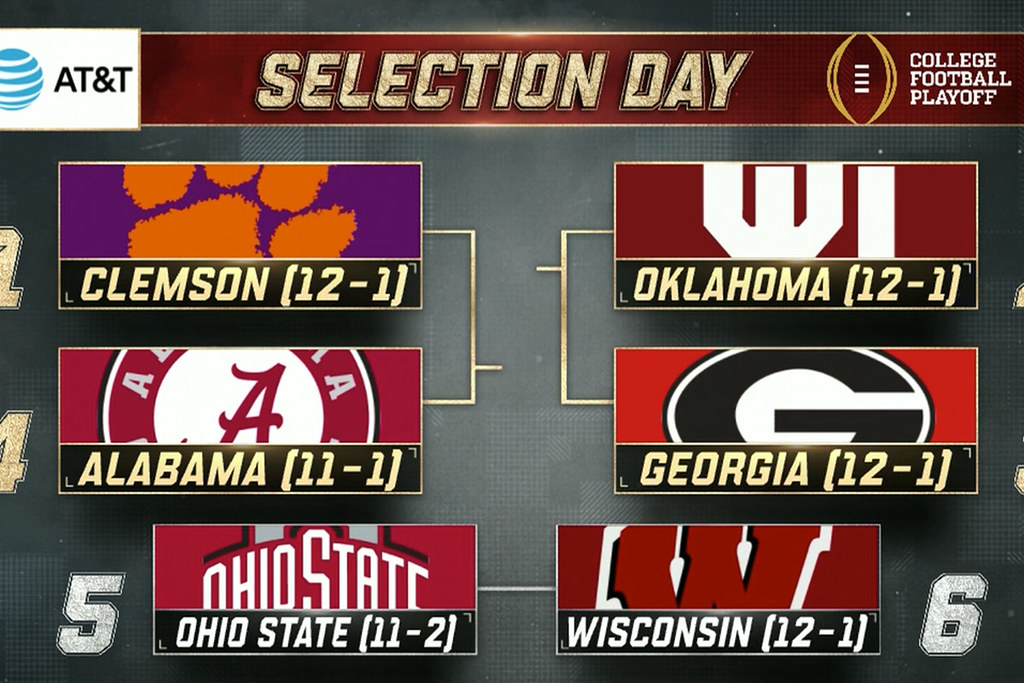 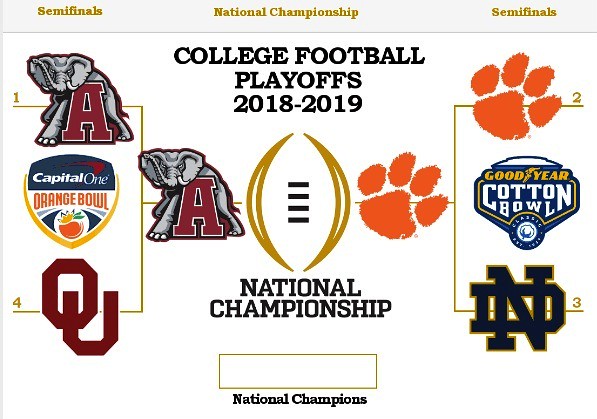 Precedent to the CFP Selection: In this section I am going to try and take what appears to be precedent, and it laid out above in the year-by-year comparisons, and boil it all down to a very simple list of precedent points.

General Notes for all years: (Some of these may be listed twice, I apologize):

Quotes and Excerpts from various articles:

“Washington got in [the 2016 playoff] with no strength of schedule. That’s what pissed me off last year.”

Alvarez added that the committee “screwed up” in 2014, the first year of the playoff. Baylor and TCU tied for the Big 12 title, each at 8-1, without a championship game to boost the resume of a potential victor.

TCU dropped from No. 3 to No. 6 in the CFP Rankings despite winning its final game by 52 points over Iowa State. Baylor went from No. 6 to No. 5 after beating No. 9 Kansas State. Meanwhile, Ohio State slipped into the playoff ahead of TCU on the strength of a Big Ten Championship Game blowout of Wisconsin.

“That last week, [I asked], ‘Guys why would we do this? Baylor and TCU sitting there like that,” Alvarez said. “It’s going to be hard to explain.'”

My Opinion and/or Rant

Is there something wrong with the CFP, or is it something else? Maybe it should be expanded? Those who know me, know that I am not “pro-playoff,” and that I actually preferred the old system of polls and voting to determine a national champion.  I could write an entire paper on that subject, but my reasons boil down to basically two things: (1) the winner of  a playoff does not necessarily give you the “best team,” one team can clearly be better than everyone else; but with one upset in a championship game, and they fall to 14-1 while the winner could be 12-3; and (2) the CFP is not a flawed system (anymore than the BCS was), and it is the mentality of the spectators that is flawed and/or confused. A perfect example of this is after years of complaining about the objectivity of the BCS selection process and its computer polls, fans finally got what they wanted (a totally subjective playoff committee). However, now everyone wants to argue over who should get into the CFP based on metrics and computer polls, and they point to things like strength of schedule, etc. (all of which are objective things that were being considered in the BCS computer polls). Long story short, expanding the playoff doesn’t make it better and only allows more teams to get a “second bite at the apple” after already losing a crucial game in the regular season. I do not want to hear about how (in 2018-2019) Georgia should not get into the CFP if/when they lose the SEC championship game, and yet also hear, from the same people, that the CFP should be expanded to eight teams, which would allow for more teams, like Georgia, to get into the CFP after they lose their conference championship game.