It hasn’t been easy for the Longhorns to let go of their long-time rival.  Despite the fact that the Aggies officially became members of the SEC on 1 July 2012 and are no longer members of the Big 12 Conference, the Longhorns don’t appear to have quite gotten over the break-up.

Just recently the Longhorns issued another parting shot at A&M as it heads East to the SEC.

For those of you who may not be as familiar with this rivalry, let’s do a quick review of the first couple of shots taken by the Longhorns.

During the final football match-up between the schools (November 2011), the Longhorns found a way to drive down the field and kick the winning field goal as time expired.  As the Longhorns lined up to kick the final field goal, a time-out was called, and thousands of Aggies and Longhorns were forced to wait to see whether or not the Longhorns would make the final kick.  During the time-out, ESPN took a moment to remind everyone why the rivalry was ending, as they flashed the Longhorn Network (LHN) logo on the screen and asked viewers to call their cable operators to request the new LHN.  A moment later, as the winning field goal soared through the uprights and Longhorn football players rushed the field to celebrate their victory, the LHN ad sunk-in as insult to injury.

As if watching Justin Tucker hit a 40-yard field goal as time expired and then start that joyful sprint away from all the University of Texas players who wanted to tackle him, as Sherman shuffled onto the field, a 27-25 loser, as clueless as ever, wasn’t enough of a dagger into any Aggie heart.

No, ESPN had to make it worse by turning the 118th and final (for now) game in one of the most storied, emotional rivalries in college football history into one big commercial for the Longhorn Network.

It was a shameless display by sports’ mothership, even when you consider the promote-itself-at-all-costs lows ESPN has routinely sunk to in the past. There is just something about taking this game — Texas-Texas A&M on Thanksgiving night — and making it a promotion for the very network that destroyed this game that rings beyond classless.

In May of 2012, while attending Big 12 conference meetings, someone asked Texas’ Athletics Director DeLoss Dodds what the possibility was of having the new Big 12-SEC bowl game in Texas now that the SEC has expanded its footprint into Texas (a reference to the SEC recently adding Texas A&M).  Dodds responded by saying that “They [SEC] have a sliver down the East side.” [Link]

3) Finally, the Longhorns take thier most recent shot at A&M as the Aggies head to the ACC!

In mid-July 2012, the LHN was planning on airing a television program about Texas A&M titled “Goodbye to A&M.”  The fact that the LHN is still airing programs about its rival, Texas A&M, is not the strange part.  What caught everyone’s attention was the shows description.  It read:  “Longhorn Network presents a special on Texas A&M moving to the ACC. An old rivalry has come to an end.” 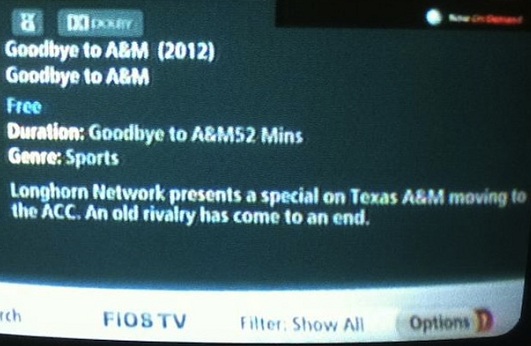 The ACC?  I guess it is possible that someone made a typo, but I think it’s highly unlikely.  It would have been one thing if the description read “SBC” or “SRC.”  A mistake like this could easily happen when trying to type the letters SEC, but that isn’t what happened.

Oh well, what will the Longhorns think of next?