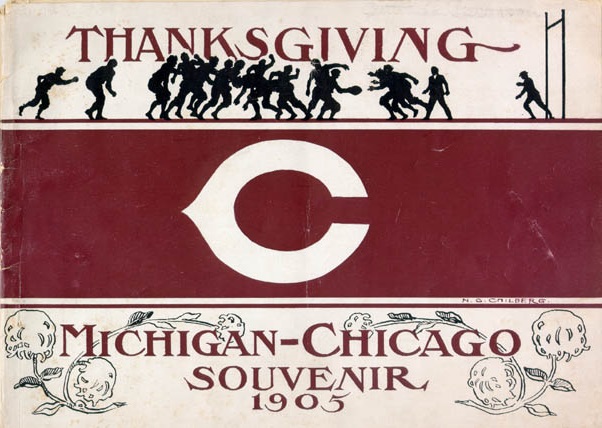 In the early 1900s, the rivalry between Chicago and Michigan was fierce and included legendary coaches Amos Alonzo Stagg and Fielding H. Yost. The rivalry was so important that Michigan’s 1898 victory over Chicago served as the spark for Michigan’s fight song (this victory inspired Michigan student Louis Elbel to write “The Victors“).

However, the 1905 game, and the tragic events that followed, remind me of the quote by UCLA’s head football coach, Henry Russell Sanders, who said “[I]t’s not a matter of life and death, it’s more important than that!”

Chicago won the 1905 meeting of the rivals by a score of 2 to 0. The game, dubbed “The First Greatest Game of the Century,” broke Michigan’s 56-game unbeaten streak and marked the end of the “Point-a-Minute” years. The 1905 Michigan team had outscored opponents 495 to 0 in its first 12 games. The game was lost in the final ten minutes of play when Denny Clark was tackled for a safety as he attempted to return a punt from behind the goal line. Newspapers described Clark’s play as “the wretched blunder” and a “lapse of brain work.” Clark transferred to M.I.T. the following year and was haunted by the play for the rest of his life. In 1932, he shot himself, leaving a suicide note that reportedly expressed hope that his “final play” would atone for his error at Marshall Field in 1905.

You can read more about the life of William Dennison “Denny” Clark and the circumstances surrounding the game and his death by clicking HERE. There is also an excellent written account of the 1905 game titled “Michigan-Chicago 1905: The First Greatest Game of the Century,” by Robin Lester, Headmaster of the Chicago Latin School, published in the Journal of Sport History, Vol. 18, No. 2 (Summer 1991).

To truly understand why the 1905 loss to Chicago was so devastating to Michigan and Denny Clark, one must first understand the dominance that Michigan Coach Fielding H. Yost, and the Michigan football teams of that era, were achieving on the gridiron. Further, you must understand the method with which Yost achieved such dominance. While I cannot find a reference to cite, I remember reading somewhere about how Yost commanded dominance from his players by drilling into them a mentality of playing fast and doing exactly as he had instructed. He told them that there was no room for innovation or deviation from what he had taught them to do. Yost’s philosophy was for his players to simply execute the plays as instructed, without any need to think about what they should do in a given circumstance; and if they could follow these instructions, they would be successful and victorious.*

The Michigan player’s learned to follow Yost’s leadership to perfection and they went on a 56-game winning streak. However, it was Denny Clark’s failure to adhere to these teachings that apparently caused the safety in 1905 and thus the loss to Chicago (referred to above as a “lapse of brain work”). The failure to do as instructed was most likely the reason why Clark was so devastated by the incident and also why he couldn’t get over his mistake.

Fielding Yost with the football varsity of 1905, courtesy of U-M’s Bentley Historical Library

The 1905 game was fairly matched and Clark’s “mistake” came towards the end of the game, leaving little chance for redemption. After 50 minutes of play, the game was tied. It was during the final minutes when Clark was tackled for a safety as he attempted to return a punt from behind the goal line. The Detroit Free Press newspaper described the play as follows (emphasis added):

“Eckersall, through failure of his team mates to advance it, was called upon to punt. Chicago at the time was on Michigan’s 43-yard line. Barlow and Clark were playing back to take the kick, but the ball, low and well driven, went between them. Clark went behind the line after the ball, with two Chicago players down on him. there was hardly a chance to get away, and he could have played it safe and avoided a score by merely touching the ball down behind the line. He shook off the two tacklers, however, and tried to run the ball back. He was a yard or so over the line on the field when Carlin reached him, and threw him back, forcing him over his own goal line. The result was a safety, two points, and the game, Chicago contenting itself from that time on with kicking out of danger when it could not advance, being satisfied to win by two points, if possible.”

— Joe S. Jackson (December 1, 1905). “MICHIGAN LOST TO CHICAGO: Desperate Struggle Resulted 2 to 0; Measly Safety Was the Undoing of the Gladiators From the University of Michigan; Game Fiercely Fought; Both Elevens Put Up a Grand Contest, Barring Fumbling on Part of Wolvernies—Garrels the Bright Star”. Detroit Free Press. p. 1.

After the game, Clark was reported as despondent and as saying “O, this is horrible … I shall kill myself because I am in disgrace.” (Chicago American, December 1, 1905).

Clark later told the Detroit Free Press: “Everybody has been good to me, telling me it wasn’t my fault, and so on. But it was my fault, and I haven’t any excuses to make. It was a mistake for me to run out with the ball and I shouldn’t have done it. I wish people would blame me. If they were only mad at me, because I lost the game, that would give me a chance to get mad too, and I could relieve my feelings.” (“CLARK MUCH ALIVE: Denny Wrought Up Over Misrepresentations; Is Anxious for Chance to Retrieve His Mistake; Takes All Blame of Michigan Eleven’s Defeat“. Detroit Free Press. December 2, 1905. p. 7.)

On December 8, 1905, 3,500 supporters crowded into University Hall in Ann Arbor to support Michigan’s football team. When Clark’s name was mentioned, the crowd cheered for three minutes, “showing that Michigan stands by the Detroit lad, and forgives his mistake.” (“YELL FOR MICHIGAN: Enthusiastic Demonstration for 1905 Team; Eckersall Remembered for Exonerating Curtis; Greatest Crowd of Years to Honor the Wolverines“. Detroit Free Press. December 9, 1905. p. 10.)

Clark carried the burden of his mistake, and the resulting loss, for the rest of his life. It appears that many tried to support him and help him shake-off the incident to no avail. The matter was simply too important to Clark and apparently nothing was able to help him overcome it.

Yost was widely known as a man of character and integrity, and in 1924 Yost met with Clark in Portland, Oregon. During their reunion, Clark recalled his 1905 error constantly and Yost tried his best to set him at ease. Yost later commented that only Clark still feels the pain of the 1905 incident. (Chicago Herald-Examiner, December 4, 1925; Portland Oregonian and Detroit News, June 2, 1932; and HERE.)

You can read more about Yost and his point-a-minutes teams at the following links: