Okay, so zombies are not really taking over but don’t try to tell this to head coach Mike Leach.  Leach is convinced that something is going on, and it could quite possibly be that some of his senior football players have turned into zombies.

Washington State head football coach Mike Leach is not happy with some of the seniors on his football team. Why?  Because he thinks they could demonstrate more leadership for the underclassmen.  In a recent news conference, Leach said that some of his seniors resembled “empty corpses” and/or “zombies.”

Leach had this to say when asked about the seniors’ attitudes: [emphasis added]

“Some of them, quite honestly, have an empty-corpse quality,” he said. “It’s not pleasant to say or pleasant to think about, but it’s a fact, which is why it’s been necessary to have the youth movement we’ve had. We play a bunch of [red shirt] freshmen and true freshmen because we get a higher effort level out of them.”

Link to this article.

So, it appears that zombies are not really invading the Washington State campus after all. 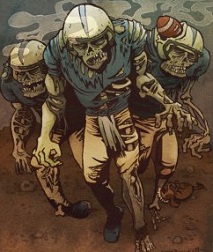 However, if you are in Pullman, Washington and you see what looks like a zombie — have no fear!  It is probably just one of the senior football players.